The Flowers and the Thorns 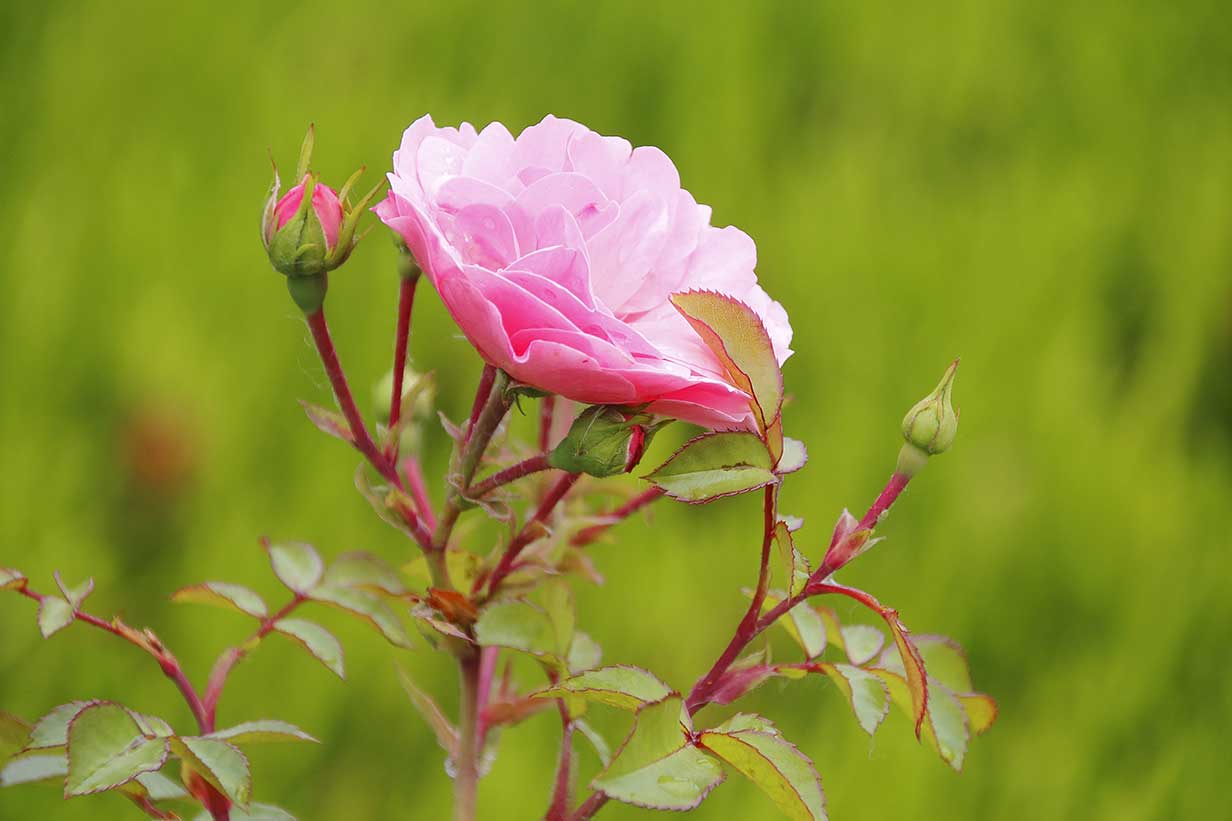 The ongoing discussion over how to define this phenomenon called Attention Deficit Disorder still veers in diverse, often contradictory directions. Is ADHD a neurobiological disorder? A chemical imbalance? A normal biological genetic condition that is ill suited for modern society? Are people with ADHD inherently flawed people? Are they simply different, in ways that can be both good and bad? Are people with ADHD privileged in some ways, perhaps even gifted? Opinions can — and do — run to extremes.

These are not simple questions, nor are they trivial. The core issue, when all is said and done, is about how we conceptualize ADHD. This in turn has profound implications for how we perceive ourselves, how we communicate our perceptions to our children with ADHD and other significant people in our lives, and what we expect from a life with ADHD.

The conceptual theory "battle lines" are roughly drawn between the empirical research-based approaches, and the more personal experiential approaches. The researchers look at statistics garnered from people who by and large seek treatment for problem behaviors and are struggling at that point in their lives. Lo and behold, this "clinical" population is experiencing higher incidences of problems of all types: school and job struggles, high levels of stress and other emotional problems, substance abuse, relationship problems, and so on. The conclusions often reached are that ADHD is a debilitating condition that ruins people's lives, and indeed that any perceived benefits of having ADHD are a "myth." What are needed are more services, more accommodations, and more laws to protect this impaired ADHD population.

Not so fast, claims the "other side" — which not so coincidentally is often represented by people who themselves have ADHD. There are many positive qualities associated with ADHD which are beneficial for the person. "I have ADHD," many individuals publicly claim, "and I LIKE a lot of what ADHD does for me." These people don't have a voice in the scientific literature, and indeed their message is basically ignored. They are unseen, unheard, and unacknowledged.

The researchers studying their sample populations don't see people like Jack Sandner. Jack experienced a self-described wild youth, became a Golden Gloves boxing champion, talked his way into Notre Dame University even though his grades did not qualify him, and later became the high powered head of the Chicago Mercantile Exchange and a fixture in Chicago society. Jack publicly announced in 1999 in a Chicago Tribune article that he has ADHD. He did so because he wanted others to know that it's not something to be ashamed of, and that indeed ADHD has benefited him in his life through the high energy, creativity, and daring that was required to achieve the level of success he achieved. People like Jack never show up in the research statistics on the pathology of ADHD, because they seldom seek treatment and don't volunteer for research studies.

Is Jack typical of most people with ADHD? No, of course not — Jack is probably not "typical" of anyone. What his story illustrates however is that he discovered and acknowledged strengths and qualities related to his ADHD which benefited him in his career and his life. These strengths are overlooked in the research studies, partly because they are difficult to quantify and measure, and vary a great deal from person to person. The controlled research studies and surveys focus on symptoms, behavior problems, and types and degrees of impairment ADHD can cause for many people. This is important and helpful work in understanding problems and finding effective treatments and coping behaviors. However, it doesn't tell the whole story.

On July 23, 1999, at a benefit dinner in Schaumburg, Illinois, ADDA premiered the independently produced documentary film on adults with ADHD titled "Outside In." The film was later shown on PBS, and made available on videotape. This film tells the story of four individuals with ADHD who are interviewed and followed around in their daily routines. It also provides expert commentary from Edward Hallowell MD, Kathleen Nadeau PhD, Patricia Quinn MD, Thomas Phelan PhD, Thomas Brown PhD, Arthur Robin PhD, Sari Solden MS, and others. This film, which provides an excellent depiction of what it's like to be a successful adult living with ADHD, was very well received by the audience attending the benefit dinner, many of whom were themselves adults with ADHD.

Part of the appeal is that the people in the movie are real people, not numbers, statistics, symptoms, or stereotypes. Listening to these individuals talk about themselves, and also to family members talking about them, one gets the impression of people who struggle with problems, who can be frustrating and challenging at times, but also are very much capable of achieving, loving, and being very likable people. These are people who learn, understand, deal with the challenges and responsibilities in their lives, and never use ADHD as an excuse. One of the people interviewed, a motivational speaker named Phil, speaks glowingly of how his ADHD features make him a more exciting speaker, comedian, and motivator. Some in the audience looked skeptical when he called ADHD a "gift," but many others applauded him. Whether or not ADHD is a "gift" for Phil, he has clearly learned how to use certain features of it to benefit him in his work. Perhaps other features were impairing at different points in his life ("when teachers found out I was going to be in their class, they took early retirement," Phil jokes), but again the point is that he found positive features and used them to his benefit.

Many people with ADHD intuitively know that there is much more to this biological condition than numbers and statistics could ever capture. Many of the leading professionals and experts on ADHD, such as Dr. Hallowell, Dr. Ratey, Dr. Quinn, Dr. Nadeau, and many others, also express an appreciation for the positive sides of ADHD in their writings and talks, as well as acknowledging the problems that ADHD can cause. It should come as no surprise perhaps that each of these professionals has also acknowledged that they have ADHD.

The cynics may interpret that as a sign of positive bias or perhaps wishful thinking. Those who live with ADHD can appreciate these views as indications of insights and understanding that can never come from an empirical study or questionnaire. After a lifetime of struggles, frustration, failures, and loss of self-esteem, many individuals with attention deficit disorders NEED to recognize, appreciate, and use such potential strengths to benefit themselves. The identification of strengths should not be regarded as the spinning of "myths," but rather as a crucial part in treatment and coping with ADHD.

Some will be tempted to view these negative/positive conceptualizations of ADHD as a battle between negativity versus hope, pathology versus benefits, statistics versus people. Taking extremist positions is seldom to anyone's benefit, and always takes a toll on fairness and simple truth. We should, to be fair, take a realistic look at what each perspective has to offer. Only blind arrogance believes in the sanctity of its own version of the truth.

Let me offer yet another metaphor for ADHD: that of a rose bush. For all I know this may not even be an original idea, but it is one that captures the dichotomy of what can be good or bad about this biological condition. The researchers can very well look at the symptoms and problems of ADHD based on a clinical population, and see primarily thorns and the effects of those thorns. "Look at how sharp the thorns are, look at the scratches, the blood, at the damage they have done," the researchers tell us. And so they have, in different ways, for different people, at different periods in their lives. It would be foolish to deny that ADHD can cause impairment, or to ignore the problems that stem from this. The Pollyanna ostrich approach is a recipe for denial and disaster.

The thorns do not define the essence of what the rose bush is, however, because the picture is incomplete. We should also point out the flowers nestled among the branches and thorns. Are the thorns more "real" than the flowers? Hardly. They are part of the larger whole, and need to be regarded seriously and dealt with realistically. This is why education and awareness plays a crucial role, along with medication, therapy, and requesting services and accommodations when those are necessary.

The thorns should not be mistaken as the primary feature of the rose bush, nor the feature that gives the rose bush its purpose and defines its identity. The problems, impairments, and disabilities sometimes associated with ADHD do not by themselves fully define the nature of this complex biological condition either. The presence of strengths and potential benefits is no "myth." The best of our writers, clinicians, and indeed researchers know and understand this. Those who don't run the risk of being much too narrowly focused, limited in the scope of their thinking, and simply wrong. We should strive for a balanced perspective that deals with the problems without denying the strengths.

This article was originally published in Focus, the newsletter of the Attention Deficit Disorder Association (www.add.org).