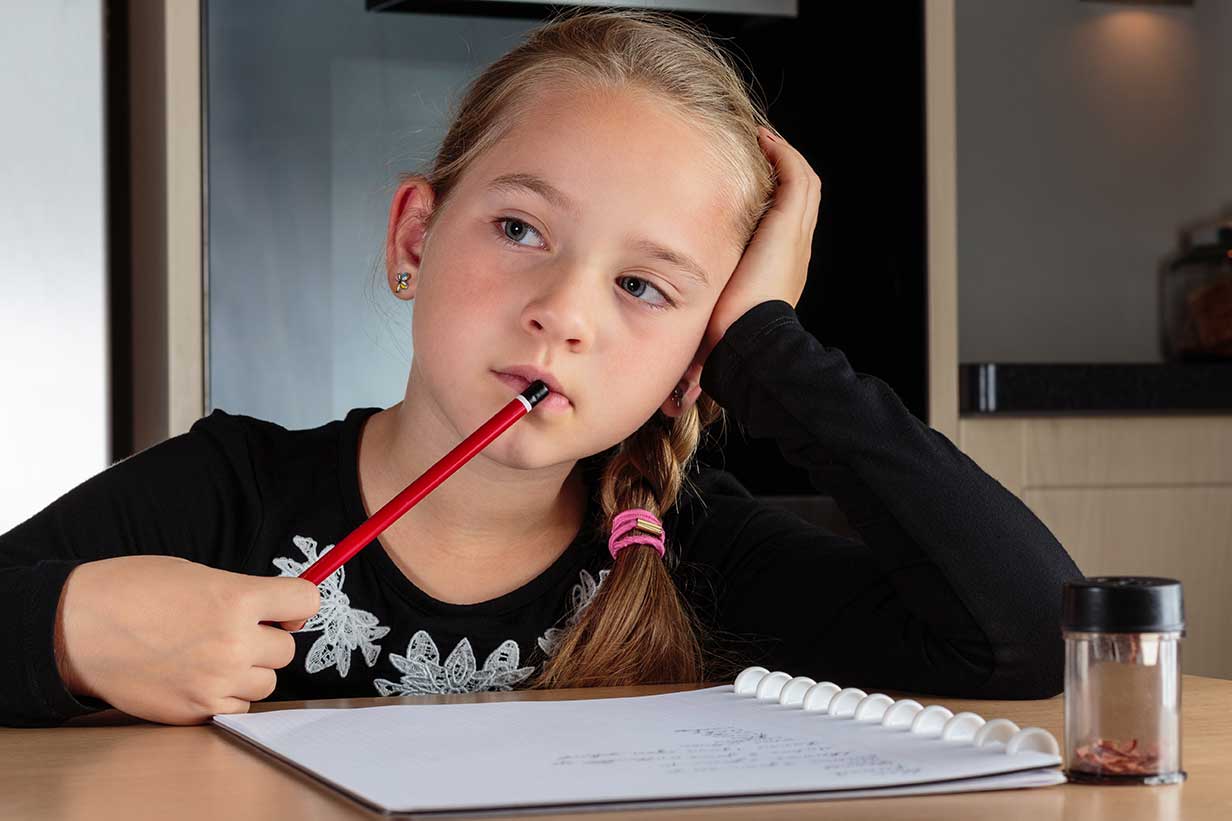 Jeff was a "dream baby," his mother says with pride. He was always happy, affectionate, well behaved, not excessively demanding or stubborn. He loved to play games and learn new things. From the time Jeff was old enough to talk, however, it became apparent to the parents that their son had much more difficulty with focusing and sustaining attention compared to other children his age.

Jeff was not good at listening when spoken to, which made it necessary to repeat directions or requests numerous times. He had difficulty carrying on a conversation for more than a minute or two. When his parents talked to Jeff or read to him, very frequently his mind would drift somewhere else. He got bored easily while playing with a toy or doing an activity, and switched to doing something else. Shortly after he started first grade it became obvious that Jeff’s attention difficulties were also causing problems for him at school. A psychological evaluation ruled out learning disabilities and emotional problems, and led to a diagnosis of ADHD.

Jeff’s parents became very proactive in educating themselves about ADHD and the impact it had on their young son. They sought treatment from a child psychiatrist and psychologist with expertise in ADHD, and worked diligently with Jeff’s teachers at school. Armed with new knowledge and professional guidance, the parents developed a treatment program that not only helped Jeff manage his ADHD symptoms at home and school, but also significantly improved his ability to focus and sustain attention. Ten key components of this program are described below.

Get The Medication Right

The single most effective intervention with ADHD for improving attention, concentration, and focusing ability, is finding the right medication at the right dosage for the individual. The excessive distractibility associated with ADHD has a biological basis. It is not caused by lack of effort or responsibility, is not a personality or character defect, and for many people cannot be managed effectively through behavioral methods alone.

The front line medications used to treat ADHD work on the basic principle of increasing neurotransmitter levels in the brain, primarily dopamine. Dopamine deficiencies are associated with low frontal lobe arousal, problems with working memory, and the formation of long-term memory. These deficits make it very difficult to get started on tasks, organize behavior, maintain continuity on tasks, sustain interest and focusing ability needed to complete a task, and to store information in long-term memory. It was not realistic, Jeff’s parents decided, to expect him to overcome those biological factors by simply trying harder or learning behavioral coping skills.

Jeff’s parents learned that in order to help Jeff pay attention, they first need to get his attention. When talking to Jeff it helps to stand or sit directly in front of him, make eye contact, and maintain frequent eye contact during the conversation. Like many other children with ADHD Jeff was initially uncomfortable with maintaining eye contact, however with practice he grew more comfortable with it. The parents also ask him to stop any other activity he’s doing at the time, and to put away any objects so that his hands are empty.

Jeff practiced improving listening and attention skills by first following directions for a one-step activity. When he became proficient at this, his parents helped him practice completing two-step activities, then three-step activities. During another activity to improve attention skills, Jeff was rewarded for maintaining attention on his work for a five-minute period. Gradually the goals were increased to staying on task for ten minutes, then fifteen minutes.

All children learn best when an activity is interesting and fun. This applies all the more for children with ADHD. Jeff and his parents regularly play games where winning requires attention and good listening skills. Some of their favorites are:

"Simon Says." This classic childhood game is the original listen-and-pay-attention game. Musical Chairs is a party game that accomplishes the same purpose.

"Champion Distractor." This is a fun competitive game the family plays. One person has to focus on completing some task, while the person playing Distractor does everything possible to distract the other person and disrupt the task. In order to win, a person must work hard to be a good Distractor and also work hard at not being distracted by the other Distractors!

"Radar Focus." The person playing the role of radar operator has to zoom in on the person who is talking and maintain radar focus until the person finishes talking. A good job by the radar operator is of course rewarded with praise and a prize.

"Zap!" When something distracts Jeff, for example a fan humming or the video game console across the room, he points his finger at it like a gun, goes "zap!," and in his imagination blows the distraction away.

Jeff’s parents and teacher came up with a list of focusing rules, which were written up as a contract and signed by Jeff and the three adults. The rules include basic goals such as: wait until directions are completed before starting, stay on task, work quietly, remain in his seat, and stay focused until the task is finished. When working on academic assignments at home or school, Jeff’s parents or teacher give him an estimated length of time a task should take to complete. Jeff competes against the set times and earns rewards for good performance.

Structure The Tasks To Fit The Child

Jeff does better with smaller, shorter assignments and other tasks. This best fits his attention skills and frustration tolerance, and in that regard he is like most children with ADHD. Large tasks should be broken down into segments or chunks that are manageable for that particular child. There is no reason to require that tasks be completed in one sitting, at the expense of mounting frustration and frayed nerves all around, when it is possible to schedule some of the work for a different time.

Another factor that makes it much easier for Jeff to sustain attention in his work is when tasks are interesting, meaningful, or in some way motivating for him. This seems to be a universal truth for individuals with ADHD of all ages. His parents have learned that when Jeff struggles the most with maintaining attention, the task is too boring for him. Sometimes it’s possible for them to present the material in a way that relates to something Jeff is interested in, or to provide incentives or rewards for completing these tasks.

Structure The Environment To Fit The Child

Most children with ADHD work better in an environment that is structured and relatively free of distractions. When possible, Jeff’s parents try to simplify his study environment and eliminate extraneous distractions. His study space is free of toys and other entertaining objects, is kept neatly arranged, and is relatively quiet. When they want Jeff to focus on eating breakfast, for example, the TV is turned off and other distractions are put away.

At school Jeff does better in smaller classes, where there are fewer likely distractions from his classmates and he receives more individual attention. His teacher helps him stay focused by having him sit close to her, at the front of the class. She also helps Jeff stay focused on his work by giving him a silent cue when he is off-task.

When Jeff begins work on a task he tells himself "I will pay attention to my work" and "I will stay focused until I’m finished." With time and lots of practice he has become much more aware of how he gets distracted, what being distracted looks and feels like, and how to catch himself when he goes off-task. The positive self-talk is repeated as often as needed, particularly when he finds himself off-task. These statements remind Jeff of his goals and encourage him to keep going.

Jeff discovered that the more active he becomes while listening or studying, the easier it is for him to stay attentive and focused. When reading he underlines or highlights important facts. He asks questions about anything that is unclear or confusing, whether he’s at home or at school. He is very active in class discussion. When studying for a test, he reviews the information by talking to his parents or a friend about the subject matter being studied.

The mortal enemies of attention and concentration are boredom and mental fatigue. Jeff and other children with ADHD become bored easier and have to work harder on tasks that require sustained mental effort. Short breaks of five minutes or so may be scheduled on a set basis, for example on the half-hour or whenever they are needed. The break is a good time to get up and walk around, get a drink of water, or perhaps go outside in the back yard. Activities that a person can get lost in, for example watching TV or checking e-mail, should be avoided.